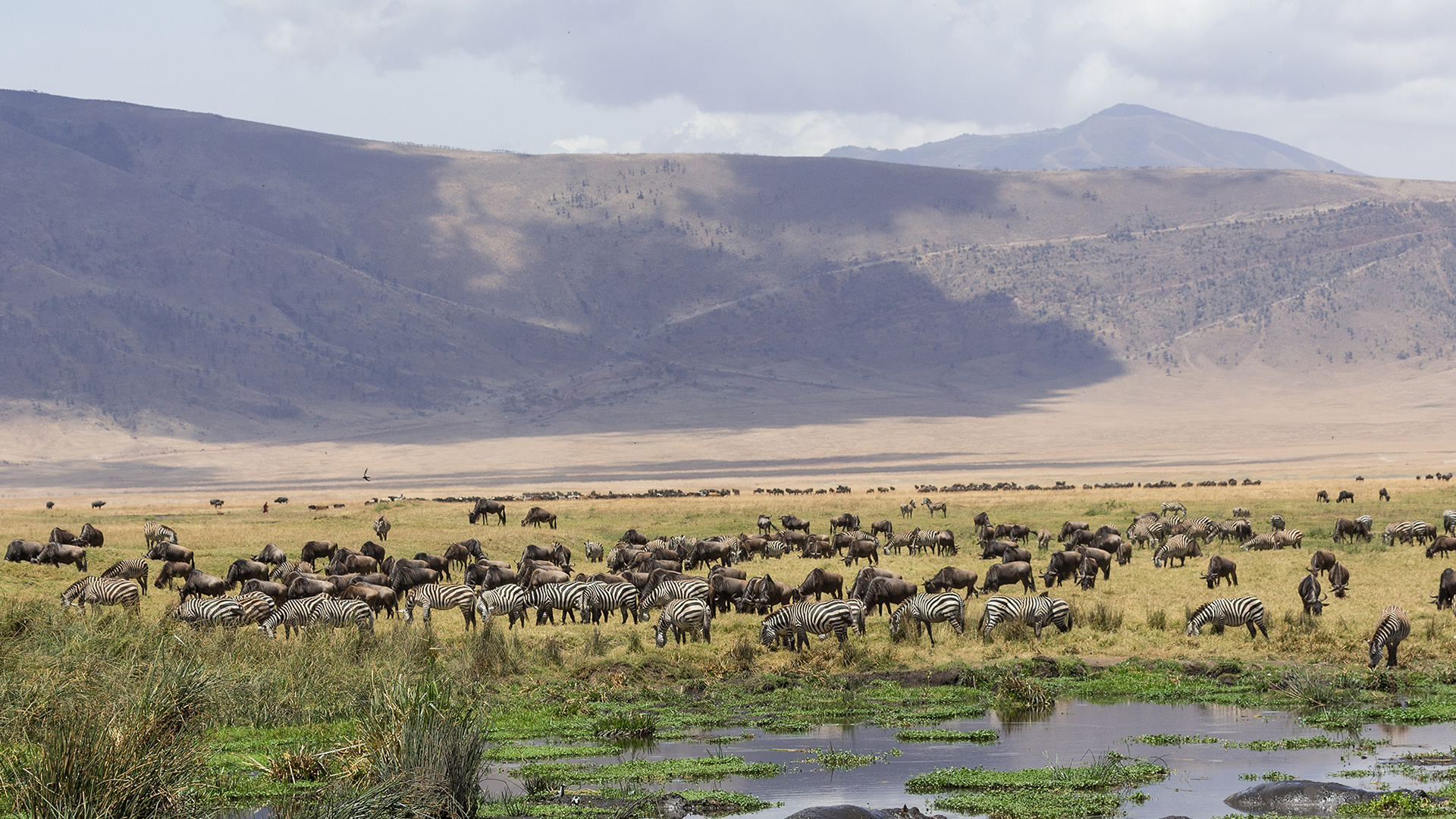 The Ngorongoro Crater is within the larger Ngorongoro Conservation Area (8300 sq KM) which is both a world heritage site and a world Biosphere Reserve in conjunction with Serengeti National park.

The famous Ngorongoro Crater is actually (geographically a Caldera), and the world largest unbroken caldera for that matter. It is estimated that before the Collapsing of the Volcano many years ago, ( about 2 million years) the Volcano was most probably larger and higher than Mt Kilimanjaro according to scientists.

Also in the same Conservation Area is Ndutu plains where the Great Migration herds concentrates during the months of December through March., as well as the Empakai and Olmoti Craters some of the famous places for walking/trekking safari in Ngorongoro.

What is unique with the Management of the Ngorongoro Conservation area is unlike the National Parks, Ngorongoro Conservation Area Authority allows co-habitation of wildlife and human beings. It is therefore very common to see Maasai people herding their cattle in the plains and also into the Crater floor. It amazes to see the youngsters especially as they fearlessly fend for their large herds of cows armed with a stick and a spear.

Another important site within the Ngorongoro Conservation Area is the Olduvai Gorge an important archaeological site where the famous Louis and Mary Leakey couple made some tremendous discoveries of the age old fossils that contributed to the evolution theory, confirming that Africa is truly the cradle of mankind. Shifting Sands and Laetoli hominid foot prints are also some of the places of interest.

The Different habitats in the Ngorongoro Conservation Area makes it a stunning place and among the must visit destinations while visiting Africa for safari.

Most visitors of the Ngorongoro Conservation Area basically concentrates on the Ngorongoro Crater an amazing place to be for all wildlife lovers and animals lovers alike.

Ngorongoro Crater is a powerhouse in terms of the wildlife concentration and has the highest concentration of predators than any other place in the world. These include the lions, cheetahs, hyenas, leopards, jackals and others. The Crater floor is also famous for short range game viewing with many large ungulates like zebras, kudus, elands, topis, hartebeests, thompson’s and grant’s gazelle, impalas, wildebeests and many others.

At the Lake Makat in the an alkaline lake at the center of the Crater floor you will be treated to an eye feast of aquatic birdlife including pelicans, flamingoes, Egyptian geese, ibises and many other non aquatic species but also to sights of wallowing hyenas taking an afternoon nap and cooling off from the African sun.

Another important habitat at the Crater floor is the Elerai forest which is a perfect place for the elephants, baboons, monkeys, the elusive leopard, and sometime a hide out for the black rhinos.

With a little luck you will be able to sight the Big Five in Ngorongoro Crater floor especially if you will be lucky to spot the leopard and the black rhinos.

The crater rim lies about 2200 meters above the sea level and it can be chilly during the early morning hours and later in the evening and so it is important to pack a fleece or a jacket.

The Crater can be toured all throughout the year especially with a top form 4×4 Safari vehicle and now that the animals never migrate out of the Crater there is no month of the year you cannot enjoy game drives inside the Ngorongoro Crater. The grass however becomes long during the main rain months and immediately after the rains in June and that time it can require the driver guide’s efforts to spot the Rhinos.