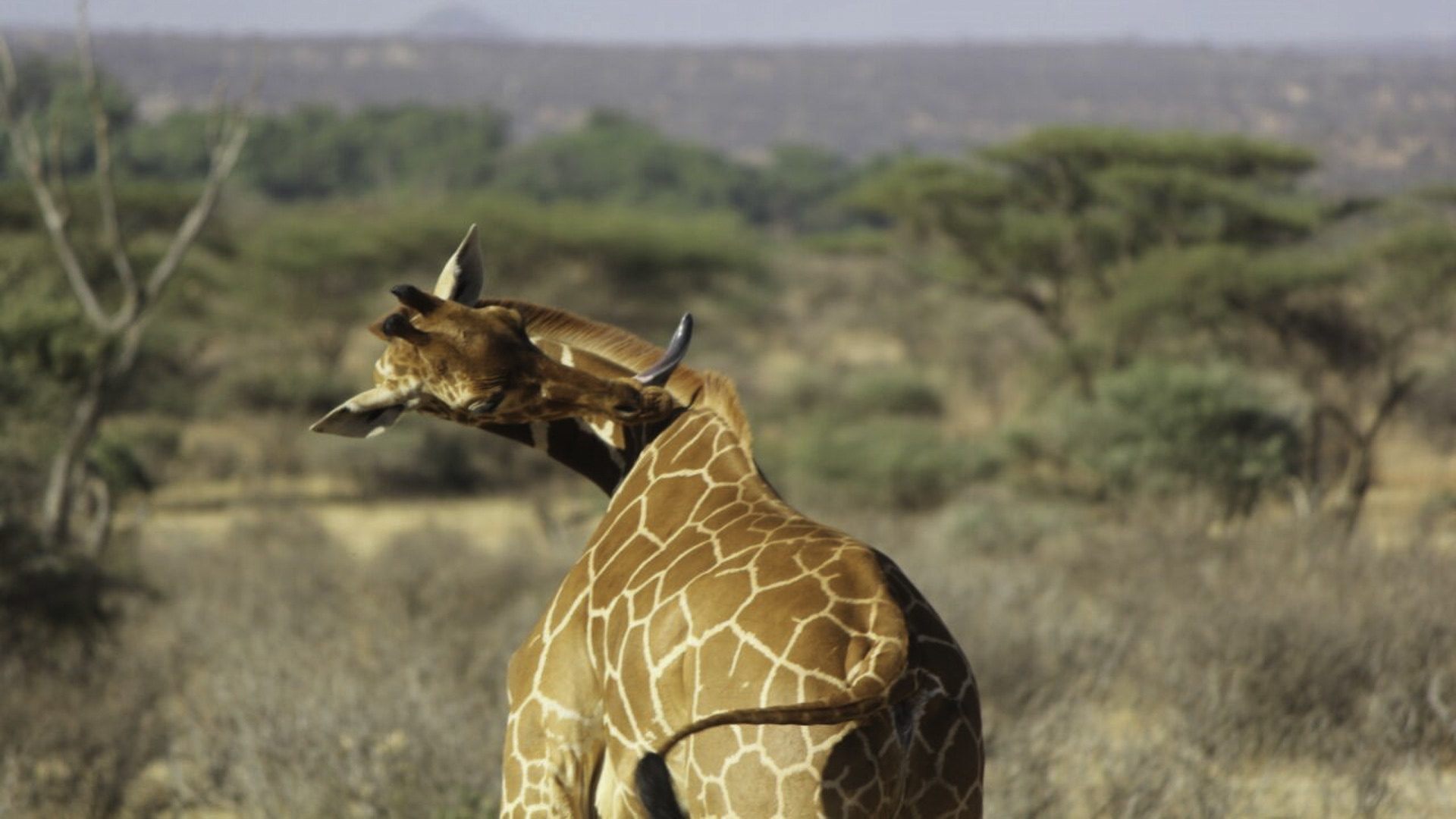 Samburu National Reserve is a rugged and semi-desert park located in Samburu district in the Rift Valley Province of Kenya. The park neighbors the homes of the Samburu tribe of Kenya, a tribe known for their remote culture, pastoral and nomadic way of life.

Samburu National Reserve is situated within the Rift Valley Province of Kenya. Measuring approximately 104sq. kilometres (approx. 65sq. miles) in size, this unfenced savannah grassland is roughly 350km (217 miles) from Nairobi. It is relatively small in size compared to other Kenyan parks, such as Tsavo National Park or Masai Mara Game Reserve.

Samburu national reserve derives its name from the Samburu people of Kenya who have lived in the area for many years.

The Uaso Nyiro River cuts through this reserve, drawing a big population of Kenya animals to the park. The river bustles with activity from its huge population of Nile crocodile.

Samburu National Reserve was one of the two areas in which conservationists George and Joy Adamson raised Elsa the Lioness. Their story was made famous by the bestselling book and award-winning movie “Born Free”.

The game reserve is renowned for its rare species of animals unique to the park, namely: the long necked gerenuk, Grevy’s zebra, reticulated giraffe and Beisa onyx. The elusive Kenya leopard is often known to visit the park, especially in the evenings.

Other Kenyan wildlife present in the park includes cheetahs and lions, as well as elephants, buffalo and hippos.

Birdlife is as plentiful as wildlife at Samburu National Reserve, which boasts over 350 different species of birds including vultures, kingfishers, marabous, bateleurs, guinea fowl, Somali ostriches and others.

The climate in Samburu is hot and dry during the day, and cool during nights and evenings.

Average maximum temperatures are around 30°C (85°F) with minimum temperatures of approximately 20°C. Most rain falls between March and May, with short rains falling from November to December, recording a total maximum rainfall of 350mm. July through October and January through March are mainly hot and dry.

How to get to Samburu National Reserve

By Road: Use your own vehicle, take public transportation, or book an open-topped minibus or safari van tour with a tour guide. The park is located about 345km (approx. 214 miles) from Nairobi, or about a five-hour drive. The roads and tracks to the park are all weather. The reserve is accessible by road via Isiolo and Archer’s Post.

By Air: The game reserve is accessible by air and there are daily flights from Nairobi to Samburu that you can book online. Travel time is about 45 minutes and the flights land at the park’s airstrip. Private charter flights are also allowed to use the airstrip.

What to see and what to do in Samburu

Game Viewing: In the southern part of the park, you are guaranteed to see most of the Kenyan animals found in Samburu, namely: cheetahs, lions, leopards, impalas, buffalo, hippos, and dik-diks, as well as the native gerenuk, Grevy’s zebra, reticulated giraffe and Beisa Oryx. You are guaranteed to see most animals during the dry season as they converge at the Uaso Nyiro River, their main source of water during the long dry weather. Elephants are also spotted during this time, and you can watch the Nile crocodiles swim in the river.

Bird Viewing: Samburu National Reserve is a paradise for bird lovers, with over 350 species of birds already recorded. You can enjoy a colorful assortment of birds such as vultures, kingfishers, marabous, bateleurs, guinea fowl, Somali ostriches and many more.

Samburu Cultural Tours: Visit the local Samburu villages where you get a chance to interact with the colorful Samburu people in their traditional setting and experience their culture. This is a good opportunity to purchase traditional Samburu souvenirs, art and collectibles.

The months of December through March and July through October are dry, making them by far the best months to visit the Samburu National Reserve. April through June are also good months but might be rainy.